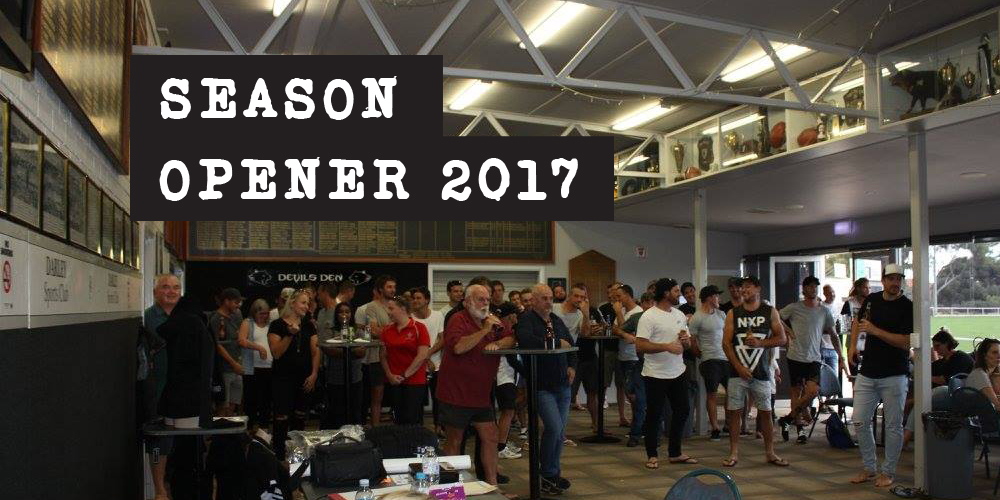 The 2017 season launched this afternoon with our official season opener. The sun was out early with some great music being played by Cam Kettle and the kids celebrated Easter early with a Egg Hunt around the ground and grandstand with loads of chocolates for everyone.

The new merchandise and apparel range was released and was sold in the club rooms, but if you missed out head to BM Print/Uniform Store on Cnr of Main St/Grant St to place an order.

Both Netball and Football captains were announced with Shane Page continuing his captaincy of the Seniors, with joint Vice Captains Darren Leonard and new recruit Chris Graham.  Our new group of players were introduced and presented with their jumper for the year along with some banter and hard hitting questions on their “football” background.

Later in the arvo the weather turned nasty but I didn’t dampen the mood and the celebrations continued with everyone pumped for two weeks time when they take the field/court for Round 1.

Huge thanks to Mel Byron, Brooke Edwards, Lorissa Edwards, Robyn Bewley, Ray Newton, Marty Dunen, Mark Shelley, Vicki Baker, Craig Baker and all the committee for once again working away to make it a great day.