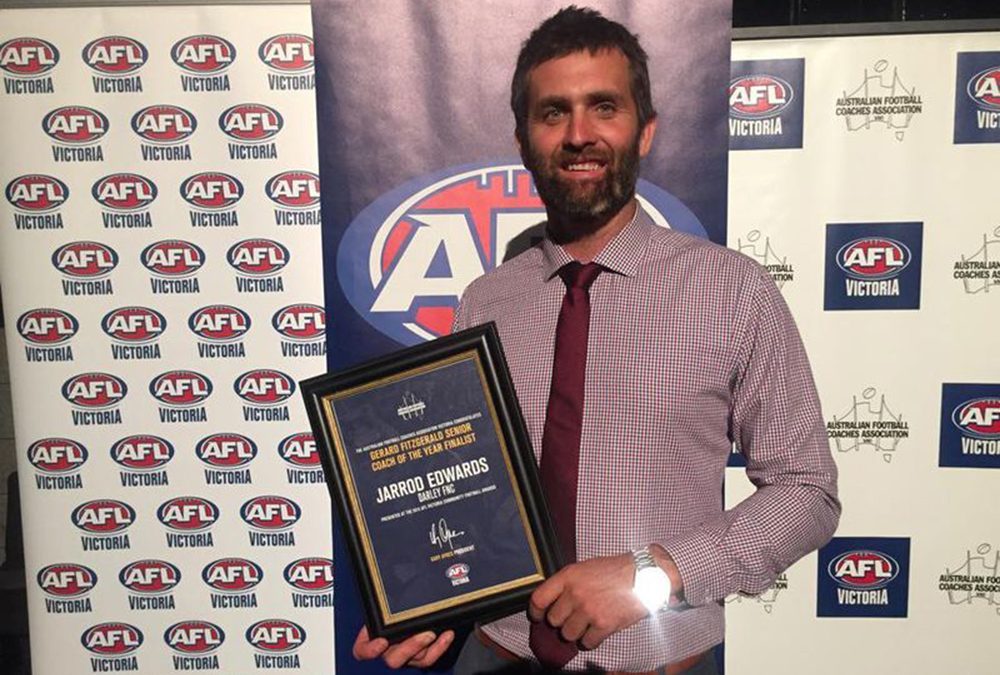 More than 500 guests gathered to celebrate all aspects of grassroots football at the 2015 AFL Victoria Community Football Awards Gala Dinner.

For the first time, the Victorian NAB AFL Auskick and Australian FootballCoaches Association (AFCA) Coach Of The Year Awards were held in one event to recognise the outstanding efforts of coaches, volunteers and umpires across Victoria.

Victoria’s finest coaches were celebrated at the event. Among them was Darley’s Jarrod Edwards, who was one of four finalists in the Senior Coach Of The Year category.

Just two years into his senior coaching career which began at Darley in 2014, Jarrod’s achievements have been nothing short of outstanding, earning him the 2015 Ballarat Football League Coach Of The Year Award; one of the league’s most distinguished honours.

In his first year on the job, Jarrod coached the Devil’s to their first finals campaign since 2009. In a fairytale ending the 2015 season, Jarrod broke the club’s 20-year premiership drought, leading the Devil’s to a convincing 61-point grand final victory over reigning dual-premiers, North Ballarat City.

Darley President, Grant Wright, said that Jarrod has played an integral role in turning the club around both on and off the field. This sentiment is echoed by the Darley community who attribute the improved culture at the club to Jarrod’s leadership and professionalism.